Download or listen below to the complete audio from the 2011 Dart Award panel discussion, "Crusading Against Silence: High-Impact Reporting on Invisible Victims."

There are many forces that suppress stories of trauma, from the active denial of perpetrators to the passive denial of those who prefer to look away.  But when human tragedy is embedded in complex institutions — high school, higher ed, the military — the challenges of reporting and storytelling multiply.

Fortunately, there are journalists who rise to these challenges, and the winners of the 2011 Dart Awards for Excellence in Coverage of Trauma, discussing their stories at a panel discussion at the Columbia Journalism School on April 27, suggested a few ways to follow their example.

First, stop thinking of complicated organizations like "the military" as monoliths, said National Public Radio correspondent Daniel Zwerdling. "We talk about institutions in our reporting as though they're people. 'The Department of Defense said this today.'" In reality, as he and ProPublica's T. Christian Miller found in their investigation into the misdiagnosis and mistreatment of traumatic brain injury among veterans, they are made up of many different people with different interests, some of whom may want to talk.

That doesn't mean getting them to talk will be easy. When those in power want silence — and in Miller and Zwerdling's case, a general ordered troops not talk — protocol, hierarchy and a real fear of backlash make speaking out risky. According to Miller, appealing to individuals' desire to help others — "those people coming behind" — helped, but first they had to earn their trust: learning the language of the institution, allowing interviewees the option of speaking off the record, and spending weeks getting to know soldiers and their families.

Photojournalist Sonya Hebert of The Dallas Morning News framed this process of earning trust in terms of a cultural barrier. She found that families feeling the ripple effects of family member's absence and combat stress were not only following explicit or implicit orders to remain silent, they were closed to the idea that they had a story to tell. To them, said Hebert, "This is just how it is."

Part of the solution was taking time to let people talk about events in the past instead of what they were going through in the moment. For a photographer, this presents its own difficulties, since images can only be made of the present.

"I would have to really look for those in-between moments," said Hebert. "Where things didn't feel all there." As in this image of Gwendolyn Roberts, waiting for her father, Sgt. Glenn Roberts, to take her to dance class. 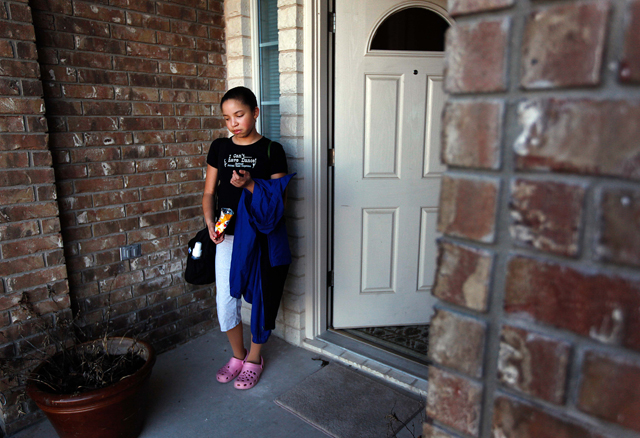 Boston Globe columnist Kevin Cullen confronted a different barrier in the story of Phoebe Prince, a young girl who committed suicide after relentless bullying. In a few phone calls he found out the facts of the case, and that the bullies were bragging about their treatment of Phoebe. They were bragging about lying to the police at a dance held just days after her death. Phoebe's story wasn't so much silenced as replaced by the story as told by the perpetrators.

His column ignited a reaction in the community, but what made it stand out, according to Cullen, was the reporting of his colleagues, who turned it into a systematic look at the effect of bullying. Said Cullen: "I don't think it would have been as successful if it was just me being pissed off and thinking this is wrong about one kid."

The same dynamics were at play in the Center for Public Integrity and National Public Radio investigation into sexual assault on college campuses. In her remarks, CPI's Kristen Lombardi dwelled on the challenge of moving beyond the individual anecdote.

"Nobody seemed to connect the dots," said Lombardi. "Nobody tried to quantify what was up until that time an unquantified problem."

To overcome this, her team systematically surveyed crisis service programs, used Freedom of Information Act requests to get complaint records, and rigorously compared official and unofficial data. (For more details, see our interview and video with Lombardi.)

All the stories had in common a movement from the personal to the institutional, the particular to the general. But perhaps an even deeper similarity lies in their motivation.

At the beginning of the evening, Dart Center Executive Director Bruce Shapiro asked for a moment of silence for Tim Hetherington and Chris Hondros, the photojournalists killed in Libya a week before. "They are exemplars of humane, not just photojournalism, but journalism of any kind: of courage and craft at bearing witness to human suffering."

In this way, he pointed out, they stood for the same values that had brought the Dart Awards event into being. Said Shapiro: "They stand for journalism that illuminates the impact of tragedy."