Aftermath of the Norway Attacks 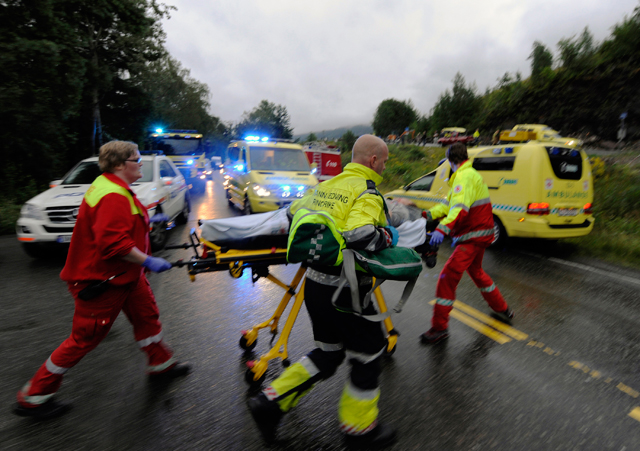 Rescue personnel push an injured victim away from the camp site in Uoteya, where a gunman dressed in police uniform killed at least 85 people on July 23, 2011. (REUTERS/Morten Edvardsen/Scanpix)

Norway is mourning the shooting deaths of at least 68 people at a youth camp on the small island of Uoteya. The massacre came hours after a powerful explosion rocked central Oslo, killing at least eight people and blowing out most of the windows on the block where Prime Minister Jens Stoltenberg works. For journalists and news managers covering the aftermath of these attacks, the Dart Center has assembled resources and tipsheets gleaned from past mass shootings, terrorist attacks and disasters.

Psychiatrist Frank Ochberg, M.D. and Bruce Shapiro, executive director of the Dart Center, share insights on covering mass killings in the aftermath of the Arizona shooting that left six dead and a U.S. Congresswoman grievously injured.

Reporter Dave Cullen's lessons from a decade of reporting on the Columbine attacks.

A self-study unit on covering terrorism.

Quick tips on working with victims and survivors from Dart Centre Asia Pacific.

A compilation of journalist-to-journalist advice.

For those who read German, Gisela Mayer, the mother of victim of the school shooting in Winnenden describes her family's experience of finding itself subject to media attention.

A series of resources on covering school shootings, with lessons from student journalists who covered shootings at Northern Illinois University and Virginia Tech.

Quick tips on how to support your reporters.

Self-care advice from an editor who's been there.

Note: the casualty figures were updated on Monday afternoon after revised figures were released by the Norwegian Police.