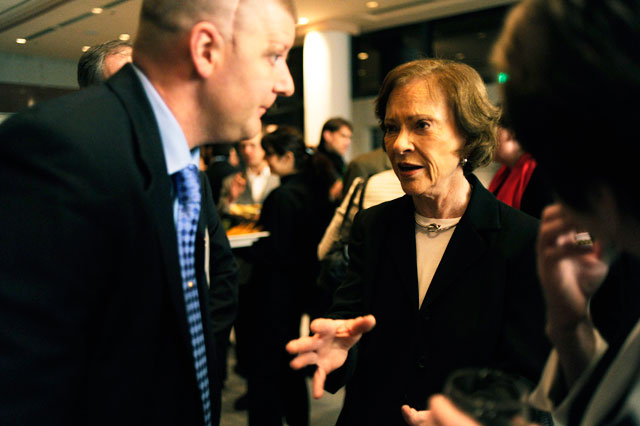 Former First Lady Rosalynn Carter speaks with retired Marine Corporal Michael Jernigan at the Carter Center in Atlanta. The Carter Center, in conjunction with the Dart Center for Journalism and Trauma and the Columbia Journalism School Continuing Education Program, is hosting a three-day workshop to help journalists cover returning service members and their communities.

Conventional wisdom about the psychological impact of war on soldiers turns out to be not very wise at all.  While public awareness of post-traumatic stress disorder has increased dramatically in recent years, in the minds of many it represents everything bad that combat can do to the mind and spirit. And the very term "disorder" implies a permanent condition from which there is little hope for recovery.

But more than 50 veterans, journalists and mental health experts  gathered at the Carter Center in Atlanta this weekend challenged the common assumptions about post-traumatic stress as they explored new ways of telling the stories of soldiers recovering from the physical and psychological wounds of war.

PTSD is a narrow, individual psychological diagnosis, sparked by a searing traumatic event, resulting in a triad of symptoms: avoidance, arousal and intrusive, recurring memories. The conversation at the opening plenary of "When Veterans Come Home: A Workshop for Working Journalists," — hosted by the Carter Center, the Dart Center for Journalism and Trauma and the Columbia Journalism School Continuing Education Program — made it clear that the effects of war on service members are far more deep and far-reaching. War scars veterans as much by pervasive threat as by single traumatic events; it causes more grief and loss than PTSD alone; and it touches veterans' friends, families and communities.

In a discussion of how journalists can convey this more complicated story, the conversation ranged from the intellectual foundations of journalism to research that remains undone (the effect of war on marriages, for instance). But one of the most compelling controversies revolved around something far more basic: a common language to accurately describe the experience of those struggling with the psychological effects of war.

Marine Corporal Michael Jernigan was on patrol near Mahmudiya, Iraq, one month away from the end of his deployment, when his Humvee was hit by a roadside bomb. He listed the physical consequences: "I had about 45 percent of my cranium crushed in. My entire forehead has been replaced with an acrylic plate. I suffered a traumatic brain injury. I had both my eyes removed. I had to have my right hand fully reconstructed."

But when Jernigan spoke of the challenges he faced back home, he didn’t emphasize only the physical. He talked about having "a different mentality," drinking impulsively, being angry and verbally abusive to those around him.  "I have scars on the outside. They're large, but they're nowhere near the scars I have on the inside."

Such inner scars have become synonymous in many minds with PTSD, despite the disorder’s narrow diagnostic criteria.

Psychiatrist Jonathan Shay, author of two must-read books about the experience of combat veterans, proposes a new and different term: psychological injury. Not only can this include despair, depression and other mental effects that don’t fit PTSD, he argued that the shift from the language of "mental illness" and "disorder" is profoundly destigmatizing. "No one speaks of General Shinseki, now Secretary of Veteran Affairs, as suffering from 'missing foot disorder.' It's ludicrous."

Moderator and National Public Radio correspondent Daniel Zwerdling asked Shay, "Semantically, why is it so important to somebody like Mike Jernigan?"

Jernigan, who said he had never heard the term "psychological injury" before, eventually interrupted to answer for himself: "When I hear the word ‘injury’: I can recover from that ... You say I have a disease: [The general public] automatically think[s] I'm sick. I'm not sick. I'm not ill. You know, I'm getting better. Every day."

For further coverage of "When Veterans Return: A Workshop for Working Journalists,” check back at the Dart Blog.