A report released by the FBI this week confirmed that mass shootings have increased dramatically in the past half-dozen years.

According to the study, which examined 160 "active shooter incidents" nationwide, there were an average of 16.4 such shootings annually from 2007 to 2013, compared with an average of 6.4 per year between 2000 and 2006. Since 2000, a total of 486 people were killed and 557 wounded, not including the shooters themselves. All but two incidents involved a single shooter, and 67 percent of incidents ended before law enforcement arrived. In fact, of incidents with known durations, 69 percent ended in 5 minutes or less, and 36 percent lasted for less than 2 minutes. 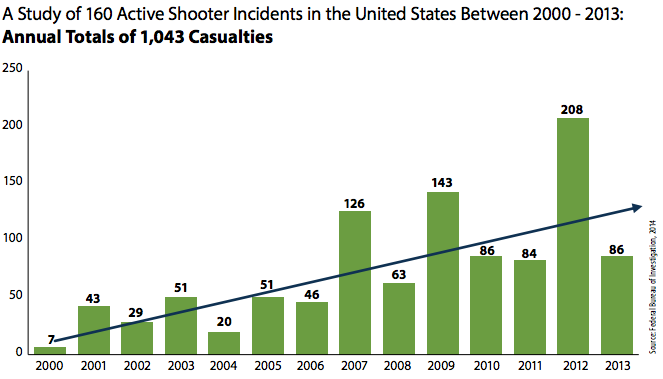 The study, according to the FBI, was intended to provide basic data in order to better prepare law enforcement. In a press conference following the report's release, FBI official James Yacone stressed the importance of expanding the availability of tactical equipment beyond specialized teams to the first line of officers.

“We now have tried to push out some of that equipment that we know is essential to the patrolman or at least the patrol sergeant,” said Yacone. The equipment needs to exist “not just within the hierarchy level within those organizations, but right down at the troop level."

The study did not, however, examine how the shooters generally obtained their weapons. FBI officials said they were open to examining this in the future.

The Dart Center has resources and tips for journalists who are tasked with covering mass shootings:

Psychiatrist Frank Ochberg, M.D. and Bruce Shapiro, executive director of the Dart Center, share insights on covering mass killings in the aftermath of the Arizona shooting that left six dead and a U.S. Congresswoman grievously injured.

Reporter Dave Cullen's lessons from a decade of reporting on the Columbine attacks.

A self-study unit on covering terrorism.

A compilation of journalist-to-journalist advice.

Quick tips on working with victims and survivors from Dart Centre Asia Pacific.

Resources for Covering Mass Shootings: Reacting to the 2010 Cumbria Tragedy, the Dart Center's Gavin Rees reflects on the story and offers resources for journalists.

In a piece for Walkley magazine, the Dart Center's Bruce Shapiro points to some of what we've learned from covering mass shootings.

In this video James Grimaldi, staff writer at the Wall Street Journal, talks about how to investigate gun sales.

For those who read German, Gisela Mayer, the mother of victim of the school shooting in Winnenden describes her family's experience of finding itself subject to media attention.

The National Child Traumatic Stress Network's resources on responding to a school crisis, suggestions for educators, suggestions for talking to children, tips for youth talking to journalists, parent guidelines for helping youth, age-related reactions to a traumatic event, and psychological impacts to consider following a recent shooting.

A fact sheet on the effects of trauma-related news media on children.

An overview of current research on the impacts of media coverage of tragedy on children.

A series of resources on covering school shootings, with lessons from student journalists who covered shootings at Northern Illinois University and Virginia Tech.

Quick tips on how to support your reporters.

Self-care advice from an editor who's been there.