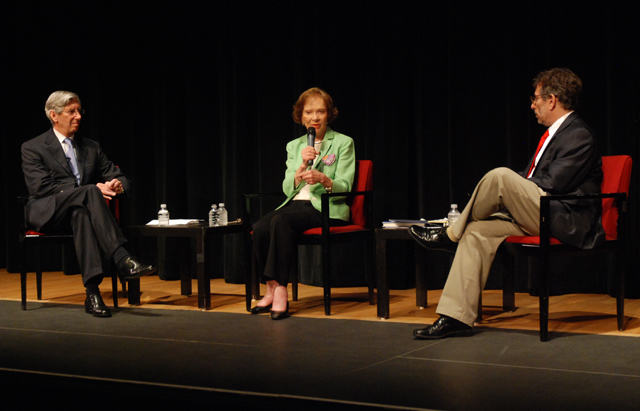 Former First Lady Rosalynn Carter speaks with Dart Center Executive Director Bruce Shapiro and Jeffrey A. Lieberman, M.D. professor and chair of the psychiatry department at the Columbia University Medical Center. Carter spoke at Columbia University about the release of her new book, "Within Our Reach: Ending the Mental Health Crisis."

Former First Lady Rosalynn Carter is frustrated and angry. At a forum and panel conversation held on Monday, May 3, she insisted that our country's current mental health system is broken, despite the $120 billion our federal government spends annually on direct mental health care.

Carter has been known as an advocate for mental health issues for over 25 years and founded the Mental Health Program at the Carter Center in 1991 to promote changes in policy and in attitude at the state, national and international levels.

In her first public address since the release of her new book, "Within Our Reach: Ending the Mental Health Crisis," 82-year-old Carter spoke at Columbia University at an event sponsored by the Graduate School of Journalism and the Department of Psychiatry along with the Dart Center for Journalism and Trauma. In a speech, she said that mental illnesses represent the country's largest hidden epidemic, because they remain shrouded in stigma. People and families are often afraid to seek treatment and aren't using the early intervention, resiliency and recovery strategies that are now available.

After her speech, Carter spoke in conversation with Dart Center Executive Director Bruce Shapiro and Jeffrey A. Lieberman, M.D., professor and chair of the psychiatry department at the Columbia University Medical Center. She highlighted the role that reporters and researchers can play in mitigating society's irrational fear of people with mental health problems. For example, sensationalistic reporting often perpetuates the myth that mentally ill people are likely to be violent. In fact, says Carter, "People with mental illnesses are more often victims of violence than perpetrators of it. They are actually victimized four times more than the general population."

Misconceptions like these fuel Carter's work around ending mental health stigma, such as the Rosalynn Carter Fellowships for Mental Health Journalism.

"We need to make up for decades of inattention and neglect," says Carter.

Still, Carter remains optimistic, as evidenced by the title of her book; She truly believes that "ending the mental health crisis" is "within our reach." Asked about the source of her optimism, she cited new medications and treatment plans that don't just control mental health symptoms but can actually offer recovery from illness and the 2008 Mental Health Parity act, which was recently expanded by the Obama administration.