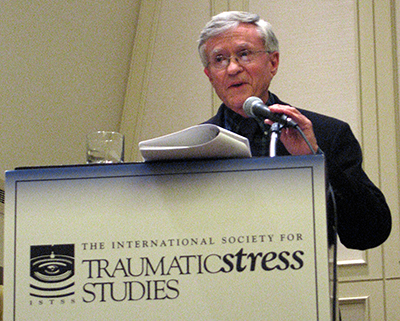 After my last post, at the end of my first day at the International Society for Traumatic Stress Studies' annual conference, the ISTSS gave out their annual awards. Of particular note: the 2008 Frank Ochberg Award for Media and Trauma Study was given to the Dart Center's founding director, Roger Simpson, for his groundbreaking research work. In his introduction, the MC referenced Simpson's book, Covering Violence, the chief text for teaching trauma journalism, as having "revolutionized the way both professionals and students approach victims and the news," and in his acceptance speech, Simpson spoke of journalism education as the field's "next frontier." That's certainly a sentiment we share here at the Dart Center; stay tuned for more important work from our academic programs.

The next day I had the chance to see a presentation on the preliminary findings of the first research (email required) on the traumatic effects of the upcoming war crimes trials of the Khmer Rouge in Cambodia. The trials, now slated to begin early next year, will mark the first time anyone has been held to account for the nearly 2 million murdered and starved to death during Pol Pot's reign three decades ago. Jeffrey Sonis, of UNC Chapel Hill, described how his research team is trying to address two competing sets of hypotheses: that rendering justice could reduce the PTSD prevalence (currently 10.7% of the population), and that airing the details of torture and murder could re-traumatize those still suffering. They found high expectations that the trials would produce justice, but even more widesperad (upwards of 80%) expectations that the trials would "re-awaken painful memories." The researchers will continue to follow the trials, doing longitudinal analysis, to see how these expectation pan out. The most surprising result, though, came out in an answer to a question from Cait McMahon director of Dart Centre Australasia. McMahon ran a training for journalists covering the trials, and found that 11 out of 12 journalists didn't know about the Khmer Rouge or the impact on their own parents. Yet Sonis found that for all responses, including the re-awakening of painful memories, the percentages were nearly identical for those above 35, who lived through the Pol Pot years, and those below 35, who did not. He theorized this might suggest "intergenerational transmission of trauma," a hypothesis he hopes to test in further research.

Later in the day, sat in on a symposium (email required) on "Constructing Terror: Traumatization of Detained Terror Suspects." The three presentations all centered on the United States' interrogators' use of torture (including, incidentally techniques employed by the Khmer Rouge, such as waterboarding). The three presentations comprised the most systematic study (PDF) of former Guantanamo detainees, an overview of the involvement of psychologists in torture and journalist John Conroy's interviews with American torturers from the Vietnam and Iraq wars. Though the details of torture itself and psychologists' complicity were disturbing and damning, respectively, most shocking to me were the long-term mental health implications that are less frequently discussed in the media. Twelve of the 18 legal counselors for Guantanamo detainees cited the deteriorating mental health of their clients as a major issue, as they "were less and less able to communicate," and nearly two thirds of the detainees themselves spoke of suffering ongoing mental health issues. This is particularly troubling since 520 of 770 Guantanamo detainees have been released with no provisions made to continue any mental health medication or counseling to which they had access while in detention.

I'm off to a presentation by two Ochberg Fellows on soldiers at war: the Times News Service's Kelly Kennedy and the American Prospect's Tara McKelvey. More on this and other panels later...