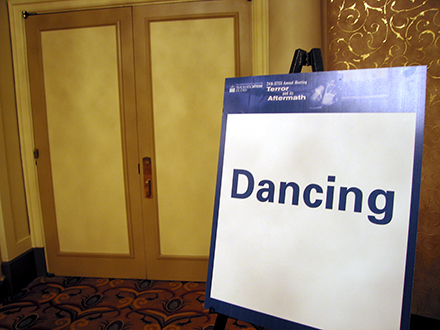 After two packed days at the International Society for Traumatic Stress Studies conference, I was exhausted, even though I didn't make it the conference's liveliest evening session (see picture). But between meetings with Dart Center and Dart Society leaders on the third and final day, I still managed to sit in on several significant panels, all speaking directly to the interface between journalists and the traumatic human experiences they cover.

First, I caught the tail end of a panel (email required) focusing on Australian journalists, featuring 2007 Ochberg Fellow Lisa Millar along with the Dart Center's Australasian director Cait McMahon, research director Elana Newman and associate director of academic programs Meg Spratt. They had already screened part of "New Media and Trauma," a training DVD featuring interviews with Australian journalists, available for free upon request from Dart Centre Australasia. As I walked in, the Q & A was a lively interchange with researchers and clinicians in the audience, at least one of whom noted that the DVD's exploration of secondary traumatization would be applicable across disciplines; specifically, for clinicians who often ignore how their patients' experiences impact their own mental health.

Next was "Soldiers at War: The Perspectives of Two Journalists." 2007 Ochberg Fellow Tara McKelvey began the panel, drawing on a year and a half of research for an upcoming book exploring a question that arose in writing her last book, Monstering: Inside America's Policy of Secret Interrogations and Torture in the Terror War: "How soldiers who have committed war crimes come home." She focused in particular on an experimental technique for treating Post-Traumatic Stress Disorder called "memory dampening" or "therapeutic forgetting," where a shot of the beta-blocker propranolol administered after a traumatic experience could prevent memories from taking hold. McKelvey reported mixed reviews from scientists; the clinicians, veterans and researchers in the audience who spoke were all against it. Renowned psychiatrist Jonathan Shay said, "In twenty years working with combat veterans, I have learned from them that forgetting is not a legitimate goal of therapy." Veterans in the audience echoed his perspective in much stronger terms:

"The notion that we should forget is about as disgusting as anything I’ve ever heard in my life ... I would have to, maybe subconsciously, dishonor the people who I left behind there ... and the day I dishonor the friends I left behind ... is the day I put a bullet in my head."

2008 Ochberg Fellow Kelly Kennedy, health reporter for the Times News Service (Gannet's newspapers that cover the military), followed McKelvey with the litany of violent tragedies that befell the soldiers in Charlie Company 1-26 in Adhamiya, Iraq in 2007, whose story she reported in a series called "Blood Brothers."

Afterwards, she explained why she included all the graphic details, both in her talk and in her story:

"I think journalists need to start telling those details, because I don’t think that people know what war looks like ... I think the general population has some vague ideas about PTSD and where it comes from and that it fits in to some kind of cowardice ... instead of the obviousness of that: of coming home and not being okay."

Finally, in one of the final sessions of the conference, Canadian psychologist Patrice Keats presented a paper on "Secondary Trauma in Journalism: A Critical Ethnographic Study." The paper confirmed the existence of many cultural practices in journalism that contribute to secondary traumatization; for instance, that journalists "learn how to suppress" the impacts of traumatic stories, in order to show they are well-equipped for prestigious foreign postings.

There were many more insights, ideas and advice for journalists, clinicians and researchers, both at these sessions and earlier in the week. Check back in the coming weeks for more on the Dart homepage.