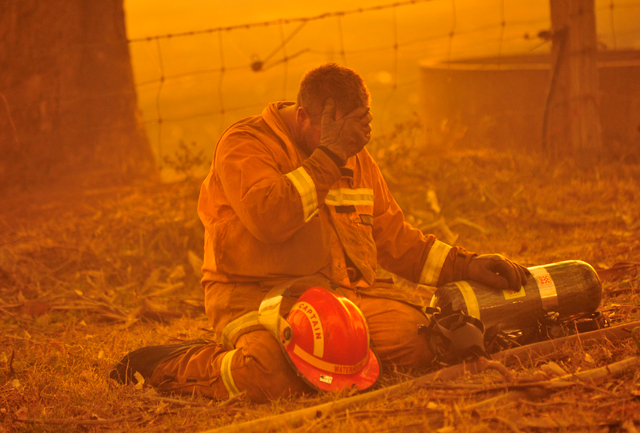 Bushfires rage out of control in Australia on February 7, 2009. The disaster posed new challenges for first responders and for journalists. Photo: Jason South / The Age

What has become known as the "Black Saturday Bushfires" is Australia’s worse natural disaster to date. On Feb. 7, 2009, a cocktail of 46-degree Celsius temperatures and 100 km per hour winds exploded into firestorms with 1500 times the energy of the nuclear bomb dropped on Hiroshima. 400 fires killed 173 people, physically injured at least 420 and psychologically scarred thousands more. A new report asks how the media fared, and what they could learn for the next disaster.

The Centre for Advanced Journalism at the University of Melbourne launched its report "The Black Saturday Bushfires: How the Media Covered Australia's Worst Peace-Time Disaster," on Nov. 19 with a panel discussion including journalists and the report's researchers. Based on interviews with 28 journalists who covered the fires, the report boldly turns the camera on the media profession itself and articulates issues of ethics and practice using the Victorian bushfires as the platform. It highlights ethical issues around media access to the disaster site, treatment of fire-affected persons, decision-making about what to publish or not publish and the inpact, psychological and otherwise, of reporting under pressures of danger and chaos. Some of these issues have been raised before — treatment of traumatised interview subjects and the impact of covering trauma on the journalists themselves. Others, however, have not been debated beyond the confines of the newsroom until now.

One such issue concerns whether or not to breach roadblocks. To highlight some dilemmas reported in the study:

Some journalists admitted to breaching roadblocks and using deception to get through, sometimes posing as volunteer fire relief workers. Others chose to not to breach roadblocks and regarded them as legal parameters that needed to be adhered to.

During the panel that accompanied the launch of the report, robust debate around the application of roadblocks ensued with John Ferguson from the Herald Sun strongly arguing that roadblocks were for the purpose of controlling the media and restricting their access to the disaster site. Gary Hughes, reporter from the Australian (who lost his house and his belongings to the fire, and, with his wife, narrowly escaped losing his life) had a survivor's perspective — that it was reasonable to protect the fire-affected community through applying roadblocks.

However, Hughes described how he dealt with his own ethical dilemmas as both a survivor and journalist, which was to "compartmentalize" some experiences as being his "survivor experiences" (stories he heard from friends and chose not to report on) and at other times feeling free to report and in the role of a journalist. Whilst he saw a place for the roadblocks as a "survivor," he also admitted that the journalist in him did actually smuggle in a photographer through the roadblocks for a story.

In regard to the treatment of victims and survivors, the report's researchers, Dr. Denis Muller and Michael Gawenda, likened journalists privileging the experience of survivors over and above their journalistic "duties" to Stockholm syndrome. The study reports:

“This has long been a difficult ethical issue for media people covering wars and disasters: Do you put down the camera or the notebook and go to the aid of a person in distress, even if it means the event goes unreported? Or do you hew to your professional duty to report the news, even if it means the distressed person goes unaided? For some of these young journalists, it was — to borrow the phrase used by one of them — a 'no-brainer.' Humanity came first; journalism second.

Allied to this was a phenomenon not unlike Stockholm syndrome in which the media person, though not physically captive, places the interests of survivors and victims ahead of the interests of the media organisation. At the fire ground, this was not uncommon. The emotional forces induced by close association with traumatised people overwhelm the countervailing forces induced by loyalty to an employer and by subjection to the hierarchical power of news desks.”

I disagree with this analogy. This type of response is one of basic human empathy, not Stockholm syndrome. To introduce this concept into the report unfortunately confuses both the understanding of the syndrome and of empathy in the face of trauma exposure.

Another disputed question about the report relates to the notion of catharsis. The journalists interviewed seem to report that fire-affected people who wanted to be interviewed found the experience cathartic — especially in the first 48 hours. The report states, “For the authorities too there are lessons here. Protecting people from the media, especially in the first 48 hours, is probably misguided and may even be preventing some beneficial catharsis.”

During the panel presentations, I questioned how the journalists knew that the interview was cathartic for the interviewee. Gary Hughes responded that he had been interviewed many times in the first 48 hours, and he couldn't remember who the interviews were for nor possibly what he had said. He found doing such interviews emotionally draining — he did not report a sense of catharsis afterwards. He followed on to say that in the first 48 hours people are basically in shock and probably not generally in a state to actually understand the implications of talking to the media, whereas in a non-trauma situation they would be able to make sense of doing so. Hughes’s questioning of this issue, and the absence of any supporting scientific evidence, suggests that this facet of the report needs to be taken cautiously.

Despite these questions, the report is ultimately an excellent document. It highlights the extent to which journalists thought about their decisions and actions whilst reporting under extreme circumstances. It also highlights the considerable toll that reporting the fires has taken on many journalists — both young and experienced alike. It will serve as a good basis for further dialogue around disaster reporting and ethics within the Australian context — just as we begin yet another fire season.