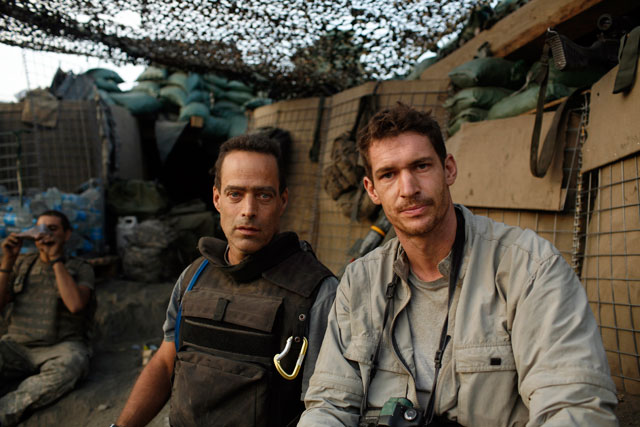 Sebastian Junger and Tim Hetherington insist they didn't want to make an activist movie. They wanted to make a documentary that showed what military deployment was like, politics aside. They wanted to show why men keep going back to war even after the trauma and the bloodshed, why they keep seeking that sense of brotherhood.

In the film "Restrepo," they've succeeded.

The Sundance award-winning documentary had its New York premiere at the Human Rights Watch Film Festival on June 19-21, at three screenings at Lincoln Center's Walter Reade Theatre co-sponsored by the Dart Center for Journalism and Trauma.

The film follows the men of the 173rd Airborne Brigade Combat Team as they begin a 15-month deployment in May 2007 to the Korengal Valley (a six-mile area later dubbed "the valley of death" by U.S. soldiers). A caption early on in the film points out that by the end of October of that year, 70 percent of U.S. bombs dropped in Afghanistan were in the Korengal area. "The fear is always there," says one of the soldiers, most of whom had never served before.

Both filmmakers have been to war–Junger is a writer and journalist who has been covering Afghanistan for Vanity Fair magazine; Hetherington, who taught him the basics of using a camera, is an award-winning photographer.

"There is no politics and no outside narration," reiterated Junger at a discussion after the film's final screening. This is the closest thing to an experience of deployment–friendship, violence, trauma and all.

The whole film is shot with a shaky, hand-held camera. Within the first five minutes, an improvised explosive device (IED) blows up under the Humvee in which the filmmakers and soldiers are traveling. They all survive. Junger immediately jumps out of the vehicle and for the next few seconds, the camera is pointed at the ground and the sound is muffled. This is real life.

The filmmakers also include footage of interviews with the soldiers after their deployment. Back home, many talk about their recurring nightmares and say that their hope is not to forget or let go of those horrors, but to be able to process the violent images differently.

The film keeps returning to the theme of camaraderie–the fun the men are able to have during down time and the true agony at losing one of their brothers. Private First Class Juan "Doc" Restrepo, a medic from the platoon, was killed within the first three months of deployment; the men name their second outpost after him. This sense of brotherhood helps sustain them during their 15-month tour; it is what brings them back to the battlefield after their initial deployment ends.

"Restrepo" is a different approach to war journalism. There are few statistics and no narration about the impacts of war. There are no conversations with higher-level generals talking about why U.S. soldiers are stationed there. Junger and Hetherington wanted the film to be as close to the experience of the combatants as possible, and since soldiers didn't have access to generals, neither would the audience.

But a different approach to war reporting may be necessary in the Korengal Valley, a place where men were in the line of fire four to five times daily. Nearly 50 U.S. soldiers died from April 2006 to April 2010, when the U.S. Army had an outpost there. One of the soldiers interviewed reflects on the impact on men who had seen so much fighting during one tour: "They don't know how to deal with us."

The film is being released in theaters in New York and Los Angeles on June 25 and in other major cities beginning July 2. For a subtle, often understated, but incredibly powerful picture of war and its warriors, go see "Restrepo." View the trailer here.