From April 2007 to April 2008, David Finkel, a MacArthur Fellow and Pulitzer Prize-winning reporter for The Washington Post, spent eight months embedded in eastern Iraq with young infantrymen of the 2–16 battalion. In his best-selling The Good Soldiers, Finkel chronicled their harrowing day-to-day experience. In Thank You for Your Service, Finkel follows the men of the 2–16 home on American soil, vividly depicting their struggles readjusting to civilian and family life.

Click below to watch the wide-ranging conversation between Dean Steve Coll and David Finkel, a master chronicler of the human impact of war.

David Finkel is an enterprise editor and reporter for The Washington Post, where he leads the national reporting team. He is the author of a new book,"Thank You For Your Service," which is the sequel to his award-winning book "The Good Soldiers," a retelling his account while embedded with the 2-16 Rangers in Baghdad during “the surge” efforts in 2007, during one of most difficult periods of Iraq War, the prequel to "Thank You For Your Service." "The Good Soldiers" was named best book of 2009 by the New York Times, Chicago Tribune, Slate.com, and The Boston Globe, and winner of the Helen Bernstein Book Award for Excellence in Journalism. Finkel won the Pulitzer Prize for explanatory reporting in 2006 for a series of stories about U.S.-funded democracy efforts in Yemen, and the MacArthur "Genius" Grant in 2012.

Steve Coll is Dean & Henry R. Luce Professor of Journalism  at the Columbia Journalism School. He is a staff writer at The New Yorker, the author of seven books of nonfiction, and a two-time winner of the Pulitzer Prize. Between 1985 and 2005, Coll was a reporter, foreign correspondent and senior editor at The Washington Post, where he covered Wall Street, served as the paper’s South Asia correspondent, and was the Post’s first international investigative correspondent, based in London. Over the years, he won the Gerald R. Loeb Award for his business coverage; the Livingston Award for his work from India and Pakistan; and the Robert F. Kennedy Award for his coverage of the civil war in Sierra Leone. He served as managing editor of the Post between 1998 and 2004. The following year, he joined The New Yorker, where he has written on international politics, American politics and national security, intelligence controversies and the media.

Coll is the author of “Ghost Wars: The Secret History of the CIA, Afghanistan, and Bin Laden, from the Soviet Invasion to September 10, 2001,” published in 2004, for which he received an Overseas Press Club Award and a Pulitzer Prize. His 2008 book, “The Bin Ladens: An Arabian Family in the American Century,” won the PEN/John Kenneth Galbraith Award for Nonfiction in 2009 and was a finalist for the Pulitzer Prize for Biography. His most recent book is “Private Empire: ExxonMobil and American Power,” which won the Financial Times/Goldman Sachs Award as the best business book of 2012. 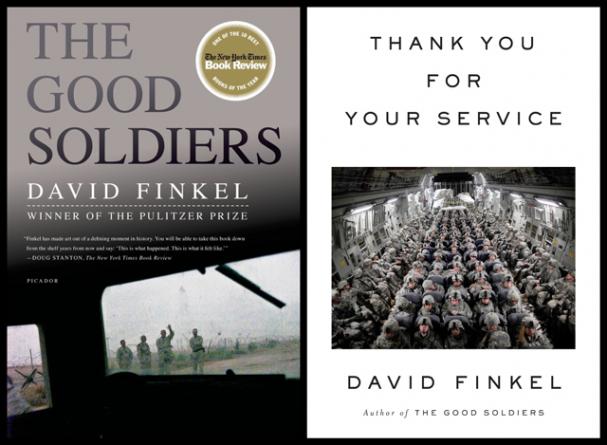 Praise for "Thank You for Your Service":

“Incredibly moving . . . Finkel reconnects with some of the men of the 2-16—now home on American soil—and brings their struggles powerfully to life . . . Told in crisp, unsentimental prose and supplemented with excerpts from soldiers’ diaries, medical reports, e-mails, and text messages, their stories give new meaning to the costs of service—and to giving thanks.”

“One of the most morally responsible works of journalism to emerge from the post-9/11 era . . . A real war story with a jarring but critical message for the American people.”

“It is impossible not to be moved, outraged, and saddened by these stories, and Finkel’s deeply personal brand of narrative journalism is both heartbreaking and gut-wrenching in its unflinching honesty.”

“I’m urging everyone I know to give Thank You for Your Service just a few pages, a few minutes out of their busy lives. The families honored in this urgent, important book will take it from there.”

Praise for "The Good Soldiers":

“Over and over, I cried. I endured nightmares. I have read hundreds of books about war and almost two dozen books about the U.S. invasion of Afghanistan and Iraq. Most of them affected me. But none has affected me as deeply as The Good Soldiers.”

“This is the finest book yet written on the platoon-level combat of the Iraq War… Unforgettable – raw, moving, and rendered with literary control… No one who reads this book will soon forget its imagery, words, or characters.”

“Heart-stopping…captures the surreal horror of war.”

“A whole generation of these men will (God willing) be coming home, and The Good Soldiers is as good a guide as I can imagine to who they’ll be when they get here”