Shock and Resilience in Samoa 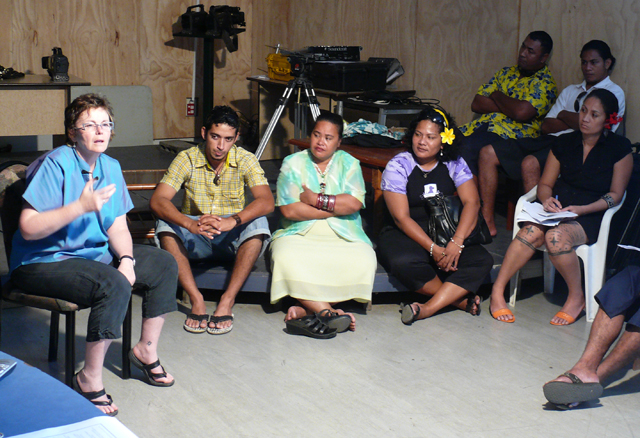 Dart Centre Australasia Managing Director Cait McMahon conducts a post-tsunami debriefing with staff from a Samoan television station in Apia, the country's capital. Many Samoan journalists experienced scenes of death and devastation in the immediate aftermath of the September, 2009 tsunami, which took 149 lives and destroyed more than 20 villages. Photo: Jon Stephenson

Mata’afa Kene Lesa woke up in heaven Sept. 19 and found himself in hell. When a tsunami struck Upolu, one of Western Samoa’s two main islands, Lesa – the editor of Samoa Observer – was one of the first local journalists to respond, racing to the affected area to be met by scenes of death and devastation.

“We were there within 40 minutes,” Lesa says. “The images were just graphic.”

Reporters accustomed to covering nothing more dramatic than sporting events, political infighting or a late-night brawl were suddenly confronted with disaster on a scale they could scarcely have imagined.

“We’re used to thinking about Samoa as paradise,” says Lesa, “and to go from paradise to complete chaos just like that is something we’ll never forget.”

More than 20 villages lay battered and bruised, with dozens of Samoans dead, missing or injured. The death toll would eventually climb to 149.

It hardly needs stating that the numbers tell only part of the story, giving little sense of the impact this tragedy has had in Samoa – a close-knit society with a population of just 180,000.

“I don’t suppose there is a person in Samoa who hasn’t lost relatives,” says Russell Hunter, one of Lesa’s colleagues at the Observer.

The extent of the tsunami’s impact on Samoans was much in evidence when Dart Centre Australasia Managing Director Cait McMahon and I arrived in Samoa’s capital, Apia, three weeks after the disaster, at the invitation of the Journalists’ Association of Western Samoa (JAWS) in collaboration with the Dart Centre Australasia and the International Federation of Journalists.

Coming from Australia and New Zealand respectively, each of us had already seen coverage in our own media portraying the sense of shock and loss Samoans were experiencing. However, seeing the destruction up close and hearing first-hand accounts of the disaster was more directly and deeply moving.

Local journalists have been especially hard hit. Like their fellow Samoans – emergency workers, in particular – they’ve witnessed some ghastly scenes. Some lost friends or relatives; others played a direct role in the recovery of bodies – in several cases, transporting those bodies to makeshift morgues.

Unlike their compatriots, they then had to report for days and weeks on the tsunami and its aftermath – an exhausting and unsettling experience, not least for the younger reporters.

During our four-day visit, organized by JAWS secretary Lagipoiva Cherelle Jackson, Cait and I focused first and foremost on listening to our Samoan colleagues – learning something of what they have lived through, and the personal as well as professional challenges they have faced as a result.

We also offered suggestions: Cait on techniques for dealing with physical and psychological responses to trauma; I on ideas and techniques for trauma reporting.

The emphasis on “suggestions” was important for both of us. Having been invited into someone else’s living room, we did not want to be seen as instructing our hosts on how to re-arrange their furniture.

Cait and I were mindful we were dealing with trauma issues in a Samoan rather than Western cultural context. One-on-one counseling, or “therapy,” for instance, is more widely practiced in the West than it is in Samoa, where close family and community ties can help foster effective peer-support.

We were also mindful of the fact that some Western journalists had set less-than-stellar examples of sensitive and compassionate reporting in their coverage of the tsunami. One international journalist, who interviewed a Samoan worker at length about the damage to his resort, failed to ask about the man’s personal welfare.

If she had done so, she would have learned that he’d just lost several members of his immediate family.

On the whole, however, the Samoan community felt that international journalists as well as local reporters had done an excellent job under difficult circumstances. This was acknowledged in a speech of thanks by Samoa’s prime minister, Tuilaepa Lupesoliai Sailele Malielegaoi.

There was tremendous gratitude, too, for the efforts of Australian and New Zealand defence force personnel, who delivered much-needed relief supplies to Samoans. And as is often the case with disasters, there were also uplifting accounts of quiet courage and resilience on the part of locals – qualities that will be in great demand in the days ahead.

Cait and I left Samoa with a clear impression of the pain and dislocation left in the tsunami’s wake, but humbled and encouraged by our colleagues’ strength and their commitment to healing themselves and their nation. As one reporter told us: “There is still a lot of shock and confusion, but there’s an emerging desire to move on and rebuild.”